We have created for you a rating of the Best 10 5.0 / 5.1 Surround Waves VST Plugins as the most downloaded and according to the excellent reviews of musicians 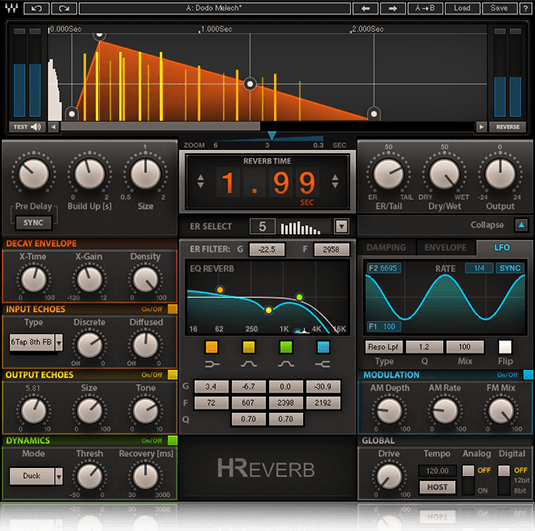 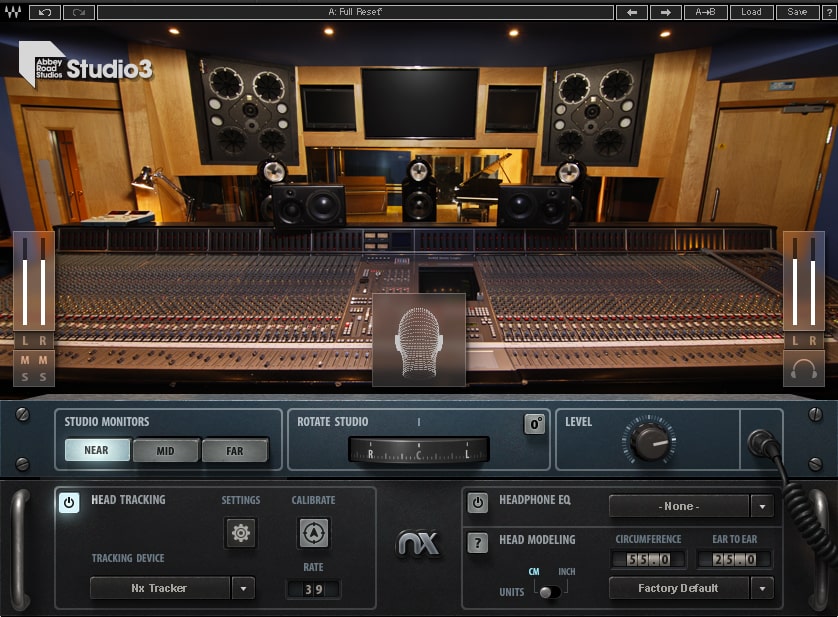 This offer cannot be combined with any coupons or other discounts.

No matter how good or bad your current mixing and music production environment is, Abbey Road Studio 3 will give you an impeccable environment to reference your sessions—on headphones. 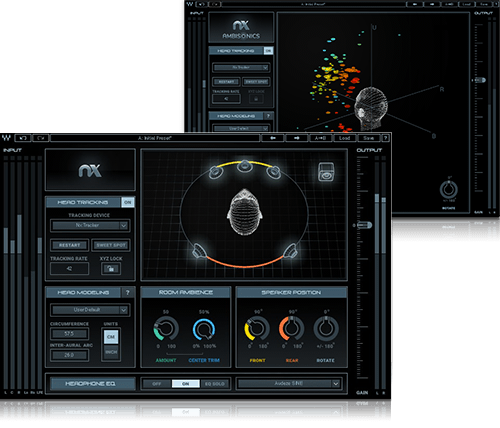 Want to create great mixes but don’t have an acoustically perfect room? Need to mix on the road? This plugin recreates the acoustics of a high-end studio inside your headphones, so you can make great mixing decisions anytime, anywhere.

Powered by Waves’ groundbreaking Nx technology, Nx Virtual Mix Room is a virtual monitoring plugin that delivers, on headphones, the same three-dimensional depth and panoramic stereo image you would be hearing from speakers in an acoustically treated room.

Nx lets you mix and monitor with greater confidence, giving you a better representation of how your headphone mixes will translate to speakers. Insert the plugin on your master buss, and hear all the elements of your mix accurately laid out in space, just as you would in the sweet spot of a great-sounding professional mix room.

Want to mix for 7.1, 5.1 or 5.0 surround on your regular stereo headphones? Nx lets you do exactly that – a revolution in surround mixing.

Nx also includes the Nx Ambisonics component, which lets you Nx Head Tracker – and enjoy the enhanced realism of being in the Virtual Mix Room, anywhere and everywhere you go. 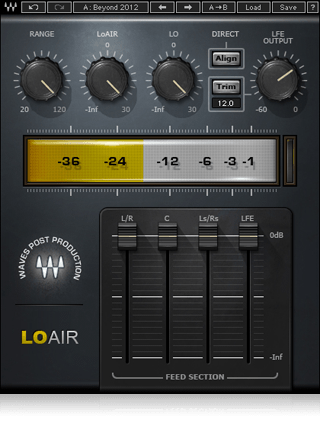 Originally created for sound design and post-production, and strongly embraced by studio and live mix engineers, the LoAir subharmonic generator plugin features two adjustable low-frequency processors for shaping your ultra-low end. LoAir is unique in that it lets you process polyphonic content that enhances your low end in the most natural and musical way.

LoAir is also designed for mixing and mastering in surround, letting you create an LFE track (5.1) from mono, stereo or 5.0 sources, easily and quickly.

Whether used for increasing dramatic subs on existing 5.1 mixes and sound effects, creating monster footsteps and massive explosions, or adding ground-trembling lows to your music’s sub synths, bass and kicks, LoAir gives your tracks all the bottom end they need. 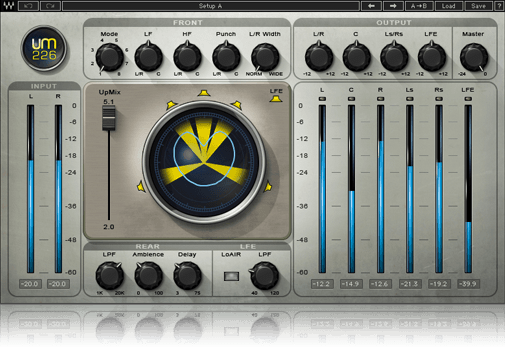 From music to movie soundtracks and beyond, audio engineers are upmixing all sorts of content from stereo to surround, to capture the excitement of today’s full, multispeaker environments. And when the original multi-track sessions aren’t available, they have to work with stereo mixes. That’s where the UM225 and UM226 stereo-to-surround plugins come in, bringing Waves quality to the new surround soundscape. 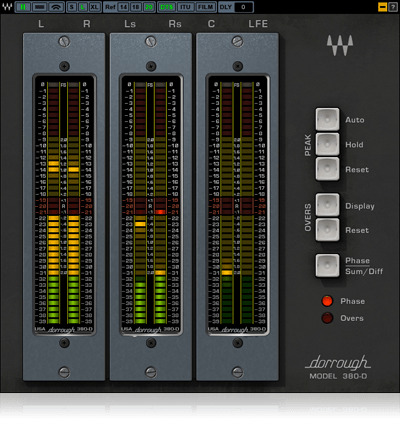 Waves Dorrough meters display both average and peak levels in a single readout, making them the only meters which actually let you see the density of your sound. 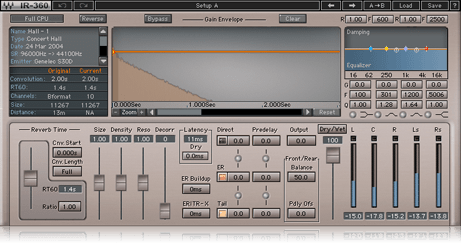 Major motion pictures in 5.1 Surround require spatial emulation that is 100% believable. Only the astonishing accuracy and complete control of convolution reverb will do. That’s why top sound engineers choose Waves IR360. This phenomenal processor delivers the epic impact of Surround sound using the cutting-edge science of impulse response technology. The result is sound so real, you won’t just hear it. You’ll be there. 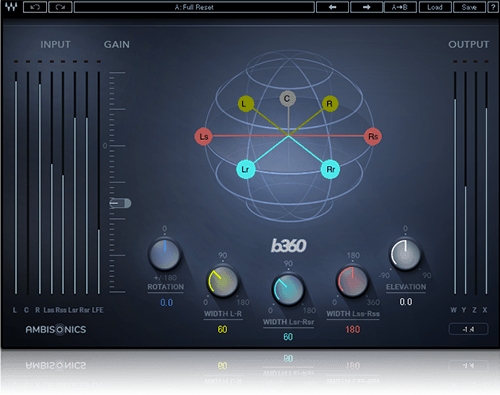 Also available: You can insert B360 on your entire stereo or surround mix, and it will convert the original file into Ambisonics B-format.

In either case, B360 lets you control the mix’s width, elevation, and rotation, as well as position the different elements in your mix inside the three-dimensional soundfield.

With an intuitive GUI and streamlined controls, B360 is designed to make your Ambisonics audio workflow faster, easier and more user-friendly than ever. 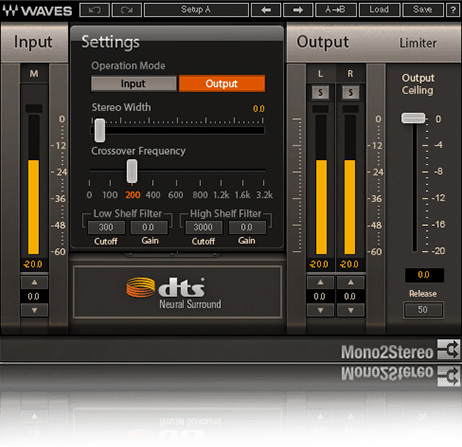 Developed under license from DTS®, this plugin suite converts mono audio sources into stereo content, which can then be turned into 5.1 or 7.1 surround.

DTS Neural™ Mono2Stereo is a high-quality stereo synthesis tool that assists in the creation of surround content for live broadcast, production and post-production. DTS Neural Mono2Stereo gives you complete control over how mono elements are positioned and perceived in the final stereo mix. You can render mono channels into stereo for stereo broadcast and streaming. The resulting stereo content can then be converted to 5.1 or 7.1 surround using the DTS Neural Surround UpMix plugin.

When using DTS Neural Mono2Stereo in multiple instances on sub-mixes or individual mono sources, audio elements can be spatially separated to preserve intelligibility and create an enveloping image that is nearly indistinguishable from native stereo content.

DTS Neural Mono2Stereo is typically used in live broadcasts of sports events, music performances and award shows. For example, to deliver a compelling experience to audiences watching a live sports event, it is imperative to capture all of the sights and sounds of the game or the race. Ambient sounds such as crowd noise, racing car engines, cracking baseball bats, or comments from the football field are often captured as mono sources. The challenge for mixers is to arrange all these complex elements into an immersive mix without masking the announcer’s play-by-play commentary.

With the DTS Neural Mono2Stereo plugin, broadcast engineers can easily create a spectrally balanced stereo image from mono sources, for accurate placement in a 5.1 or 7.1 mix. This way the ambient effects can be decoded and reproduced as the mixer had intended, preventing unwanted ambient content from being steered directly to the center channel. 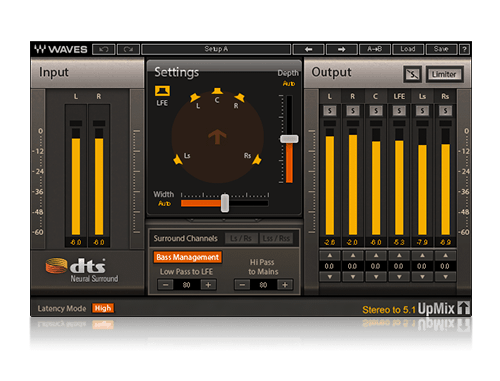 Developed under license from DTS®, this plugin lets broadcast, post-production and mix engineers convert stereo audio to quad, 5.1 and 7.1 surround, as well as 5.1 to 7.1 surround, in cases where original source elements for standard upmixing are not available in the desired multichannel format.

Television Broadcast
When used in a stereo television master control room, DTS Neural Surround UpMix will render original stereo content into surround. The surround mix can then be encoded and combined with video for delivery of a complete HD broadcast.

Remote Broadcast
The DTS Neural Surround UpMix plugin is an ideal software replacement for the legacy hardware components that many broadcast trucks currently use. This cost-effective software-based solution gives remote broadcast companies the freedom to upgrade to modern systems without losing the processing tools integral to their production workflow.

Internet Streaming and Television/Radio Production
DTS Neural Surround UpMix enables production engineers to render stereo into surround content. The mix can then be streamed over the Internet or terrestrially broadcast.

Write your review and rate this rating The Best 10 5.0 / 5.1 Surround Waves VST Plugins 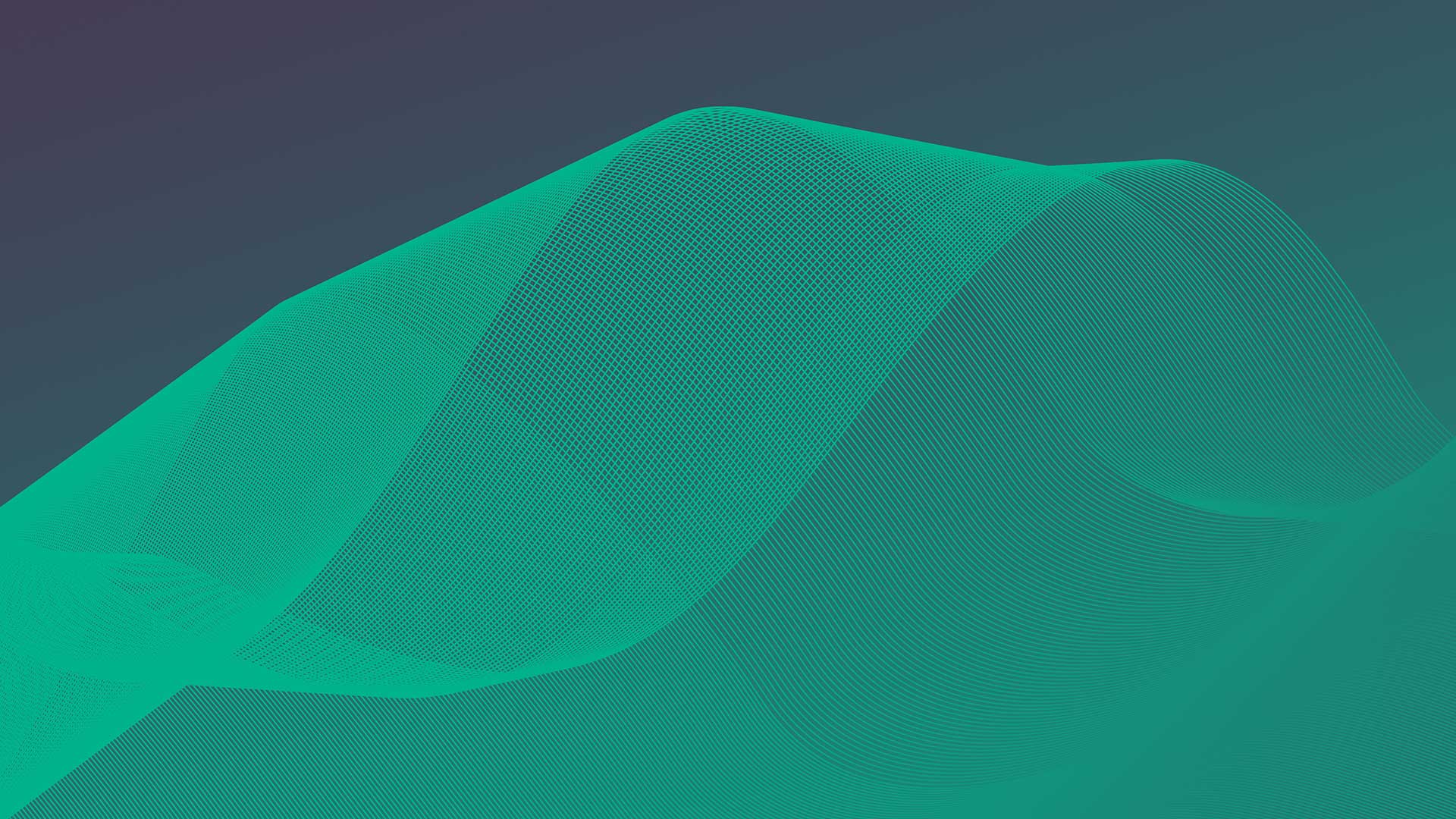